This multi-year project was initiated and led by Dr. Michael Jarvis of the University of Rochester in 2010. Taking the entire 60-acre island as a collection of sites reflecting 400 years of Bermudian history, Jarvis seeks to identify and study all sites of human occupation, starting with the farmstead of Sea Venture castaway Christopher Carter and his mates Edward Chard and Edward Waters, occupied from 1610 to 1612. To date 23 sites have been found, including an early 17th century house, the 18th century whale house, a maritime quarantine hut, Smallpox Bay cottage, an 18th century mansion, several slave quarters, water catchments, tanks, limekilns, quarries, and a collapsed cave complex. In future years the University of Rochester field school will investigate the whale house, Forbes mansion, cave site and West End slave quarters as it trains students in archaeological field methods and historic research techniques.

Keep up to date on this exciting and ongoing dig on Smith’s Island. Michael Jarvis keeps us posted on new developments.

Archaeological work at Verdmont began in 2006 with Ironbridge Gorge Museum’s excavation behind the kitchen. The team was interested in finding activity areas of the enslaved Africans on the site. In 2007 an archaeology dig focused on the eastern side of the main house searching for a number of buildings that are recorded in archival documents but of which no above ground structures have survived. Archaeologists were also looking for evidence to illuminate the social history of the site. Organised by the Trust Archaeological Research Committee and run by Brent Fortenberry with Travis Parno, both historic archaeology postgraduate students from the University of Bristol, the excavations were carried out by Bermudian archaeology students and local volunteers. In 2013, Brent Fortenberry continued his work at Verdmont with the excavation of the “Verdmont Ruin” in an area that has been known as the kitchen garden. Digging revealed the remains of the outbuilding from the earliest period of occupation of the site.

The State House in St. George’s was the first purpose built Assembly House in the English Atlantic World. It was commissioned by Governor Nathaniel Butler and was completed about 1621. After Hamilton became the capital of Bermuda in 1815 the building was leased to a Masonic lodge and is still used as such today.
Archaeological work at the State House took place in 2005, 2009 and 2010. Work focused on the development of the building and the archaeological materials associated with civic life in the building. An architectural and archival survey showed that the building went through several major renovations. The building as it appeared on a John Smith engraving probably only lasted for a dozen years. Its flat roof began to leak almost immediately. As altered over the years the building more closely came to resemble a piece of Bermudian architecture with a pitched roof and prominent entry porch.

This impressive two-storey mansion was already built when the land on which it stood was granted to merchant Walter Mitchell in 1707 and was later home to Colonial Secretary George Tucker and silversmith John Trott Cox. In 1990 and 1991, Colonial Williamsburg archaeologists excavated inside the house’s northern addition and in the adjoining garden to learn more about 18th century Bermudian trading patterns.

A large stone water trough discovered in the garden shed light on slaves’ domestic activities, while the discovery of several sherds of Colonoware (African-made coarse earthenware), imported from the Carolinas or Caribbean, revealed black circum-Atlantic trading connections. Numerous shards of Spanish, French, and Dutch ceramics indicate that merchant Mitchell was not a strict observer of British Navigation laws. Buttons, pins, and beads excavated in the early 1990s have recently been reexamined to understand the lives of enslaved Bermudians in the 18th century. Archaeologists have used artefacts related to clothing and personal adornment to explore enslaved peoples’ religious, cultural and economic practices. Small finds like these allow researchers to challenge and add detail to the written historical records that frequently exclude the experience of enslaved people.

The most startling discovery of the 1991 season was an unmarked grave predating the construction of Stewart Hall. Archaeologists found the body of a woman between the ages of 25 and 40, buried in a shroud (rather than coffin) under the stone water trough. Ploughing after the burial erased the grave cut. The burial apparently dates to the mid 1600s. Her skeleton has since been re-interred in St. Peter’s churchyard. 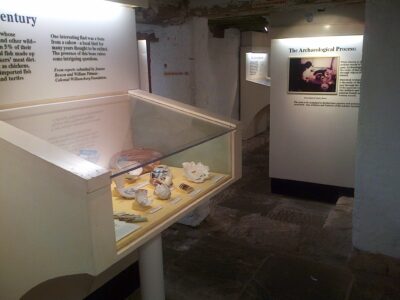 The basement of Tucker House is home to the Trust’s archaeology exhibit. The display cases in the exhibit show fragments of china, glass, earthenware, early buttons, marbles and artefacts made of bone. There are also clay pipes, gun flints, hat buckles and hinges, tooth brush fragments, decorative beads and shoe buckles. Not all artefacts have been identified; some remain a complete mystery to all who have seen them. Additional information on the Tucker family can be found in one display case.

Even broken and discarded pottery can tell a story. Much of what we know about Bermuda’s early days is a result of the work of the Trust’s Archaeological Research Committee. Starting in 1988 and working with a group from Colonial Williamsburg, they carried out parallel studies of the homes of Henry Tucker in St. George’s and his brother St. George Tucker who had emigrated to Williamsburg in Virginia. The dig at Tucker House revealed a great deal about the life of that family during the time of the American Revolution. Archaeologists found large quantities of stylish and expensive ceramics from England and Continental Europe. The quality of the wares and the existence of matched sets suggests that the Tuckers were an affluent family. Comparisons with Williamsburg artefacts of the same period (1775-1807) show a far greater range of types in Bermuda and suggests that Bermuda with its excellent location for trade had easier and earlier access to imported goods; for example, many English bone china shards were found in the cellar. Given that Josiah Spode only perfected the formula for bone china in 1797, it seems that the Bermuda Tuckers were up to date with the latest London fashions in dinnerware at least. In Williamsburg, however, bone china did not appear until after 1830, perhaps reflecting strained trading relations between Britain and the break-away American colonies.