A vital part of our environment, our farmlands are also an important visual amenity and contribute to healthy living and economic diversification. The Trust leases out about 32 acres of arable land all over the Island to commercial farmers.

For security reasons, these properties are not open to the public.

Locust Hall Farm, 24 acres comprising 12 acres of working farmland and an equal amount of woodland, is one of the largest farms in Bermuda. The fields, which are large by Bermuda standards, offer a glimpse of an earlier, rural Bermuda. They are farmed for vegetables and flowers by the Pacheco family. The property also has two cottages and a small Victorian house.  An old Bermuda drystone wall on the southern boundary of the property runs under the shade of an Allspice forest and is covered by the very rare Long Spleenwort Fern. 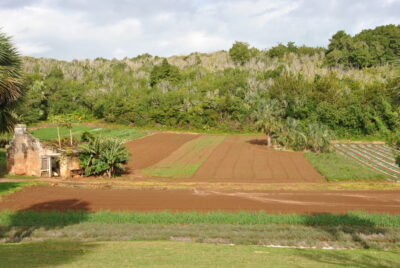 Devondale is the largest of the old houses along South Road, Devonshire. This beautiful late 18th century Grade II listed house and 10 acres of woodland and farmland was transferred to the ownership of the Bermuda National Trust from the estate of Mrs Jean Cox Spence who died in June 2012.

By bequeathing this property to the National Trust, Mrs Spence reconnected under single ownership two large Devonshire estates (Devondale and Locust Hall) that were once both owned by her family before being divided in 1857. Mrs Spence’s legacy creates a 34-acre rural tract of land stretching from South Road to Middle Road, Devonshire. Under the National Trust’s ownership this land will be preserved for the benefit of Bermuda forever.

Nea Smith, a long-time supporter of the National Trust, gave half her interest in this 8 acre property to the Trust and with it came the proud farming tradition of her family. Her father Reeve Smith and uncle Howard Smith had originally farmed together in St. David’s, but they were relocated by the Government when the aiport was built. Howard was famous for the cultivation of Easter lilies, and is remembered as the man who developed the early – blooming Easter Lily that is named after him, Lillium howardii.

The property reaches the coastline on both sides, being bounded by a sizable mangrove swamp at Ferry Reach and by Mullet Bay on the other side. The neighbouring two acres were acquired in 1980 by the Bermuda Audubon Society, which excavated and landscaped Bartram’s Pond, opening the property as a nature reserve in 1985.

Adjoining Paget Marsh is a small cottage and farmland that has been farmed for more than 100 years. As well as arable fields, there is a banana patch and fruit trees.  The land was purchased in 1965 by the Historical Monuments Trust, predecessor to the Bermuda National Trust, which already owned two parcels of land at Paget Marsh. 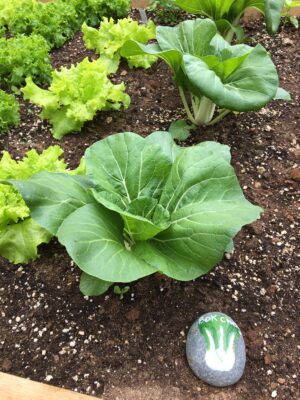 The Trust owns 20 allotments at Tivoli, Middle Road in Warwick. The plots are 20’x20’ in size and are rented on an annual basis. To register your interest in one of these allotments please fill in the application form and email it to palmetto@bnt.bm.

Signing up for one of our allotment gardens has many benefits. You will be joining a community of like-minded people who are more than happy to share their experiences growing fruit and vegetables in Bermuda. Maintaining an allotment garden is mentally and physically healthy and can be a multi-generational activity. Engaging children in growing their own food is helping the next generation to live a more sustainable and healthier life.