Smith’s Island goes right back to the beginning of Bermuda’s story. It was home to the island’s three original residents – Christopher Carter, Robert Waters and Edward Chard – the sailors left behind (with the ship’s dog) when the rest of the Sea Venture’s crew and passengers left Bermuda for Virginia on the Patience and Deliverance in 1610. It was the seat of the first government when Bermuda was settled in 1612. Over the years it has been the location of an agricultural station, a whaling station, a smallpox quarantine camp and a plant nursery.

With all its history, the 61 acres of Smith’s Island remains mostly undeveloped today. The eastern third of the island is a National Park. The central section was subdivided into half-acre lots, of which the Trust owns ten, with an unpaved road system. In 1999 the Trust bought the entire western third of the island from the Bourne estate, using an Open Space Fund created by the Bank of Bermuda Foundation. The fund fell short of the purchase price, but luckily the Government helped, becoming joint owners of the property with the Trust on the understanding that it would be managed by the Trust and be declared inalienable under the Bermuda National Trust Act.

Known as the LA Bourne Nature Reserve, it is covered with low-stature thicket, dotted with bare trunks of the cedar forest killed in the cedar scale epidemic. Cedars are re-growing naturally on the site, and the reserve has a very high percentage of native flora such as Wax Myrtle and Doc Bush, a high survival of mature Palmettos, and Bermuda Bedstraw groundcover. As a nature reserve, it preserves open space as a remnant of old Bermuda, provides critical habitat and also retains the undeveloped aspect of the islands of St. George’s Harbour when viewed from the town.

Dr. Michael Jarvis, University of Rochester Rhode Island has led archaeological and historical research on Smith’s Island since 2012. The research and field school is supported by the Bermuda National Trust, St. George’s Foundation and the  Bermuda Government.

Location: Dolly’s Bay, St. David’s NOT OPEN TO THE PUBLIC

Bee Hive Farm Nature Reserve, the gift of David L. White, a former President of the Trust, is a 0.06 acre strip of rocky shoreline along the roadside in St. David’s on Dolly’s Bay. Mr White’s grandfather had acquired property in this area over the years 1924-1933, and Mr White gave this piece to the Trust in 1990. According to the deeds, there was a fishpond and wooden pier on the site, although neither is in evidence today. Bee Hive Farm Nature Reserve is now covered in Buttonwood and Palmetto and the site is left to nature as one of the shoreline habitats that are becoming rarer with time.

Location: Ferry Reach, St George’s NOT OPEN TO THE PUBLIC

Named after one-time owner William Rogue, not rogues in general, this fifth of an acre island is located at the western end of Ferry Reach. The heirs of Arthur Gorham gave the island to the Trust in 1979. Despite its size, it has real environmental importance as one of the few remaining places where Bermuda Bedstraw, a rare endemic plant, can be found.

This small island demonstrates the importance of islands, even tiny ones, in the conservation of rare species. The Bermuda Bedstraw was at one time common in the Tucker’s Town area, and was harvested in large quantities, dried and used in mattresses. Rogue Island was the second island to be given to the Trust and the Trust was delighted to find the Bedstraw on it. The tiny population of Bedstraw was used a source of seed for recolonising Nonsuch Island and other reserves.

Location: Hamilton Harbour NOT OPEN TO THE PUBLIC

At 3.2 acres, Saltus Island is one of the larger islands in Hamilton Harbour near Point Shares in Pembroke, and was the first island given to the Trust. It was earlier known as Stowe’s Island but was given its current name following its acquisition in 1876 by Samuel Saltus, the founder of Saltus Grammar School.

It was given to the Trust by Richard Aeschliman in 1978,  to be kept as a nature reserve with no development and no public access. However, due to a problem with invasive species, the donor gave permission for a management programme for their removal.

The challenging task has been undertaken by the students of Saltus Grammar School. Funded by a grant from the UK’s Overseas Territories Environment Programme, they visit the island regularly to help remove invasives and plant native trees. Their initial focus has been on the casuarinas in the southeastern section of the island which are of the “walking’’ variety and spread easily over rock and shallow soil. In 2002 a small patch of the highly endangered Bermuda Bedstraw was discovered, making preservation of native species on the island all the more important.

Location: Little Sound, Southampton NOT OPEN TO THE PUBLIC 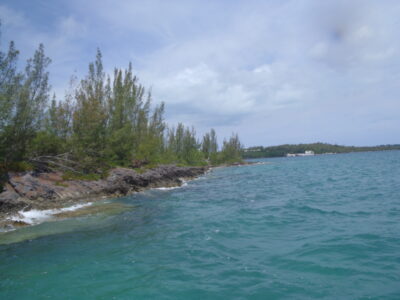 Nicholas Dill and his family wanted to ensure that this four acre island in Evan’s Bay, Little Sound, would be protected from development.

In 2008 they gifted it to the Trust, with the Trust leasing it back to the family for 999 years with protective covenants. The Trust has used long leases as a means of protecting historic properties for many years, but this was the first time one was used to protect open space. The island is covered in low shrub, predominantly invasive species, but surrounded by very shallow water in which Great Blue Herons and Egret wade and feed, and Merganser ducks paddle and dive.

Location: West Side Road, Sandys NOT OPEN TO THE PUBLIC

This nature reserve comprises a beautiful wooded hillside dropping steeply to a small cove in Methelin Bay. It was left to the Trust by Marjorie Jackson when she died in 2001.

A small cottage nearby was also part of the bequest. As it was modern with no historic value, the cottage was sold in 2007 to raise the funds needed to restore Palmetto House.

Location: Ely’s Harbour, Sandys NOT OPEN TO THE PUBLIC 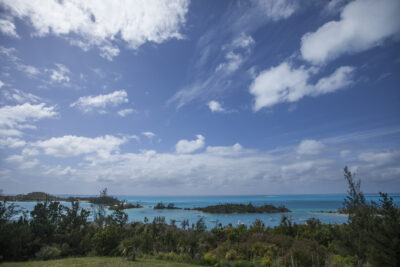 Palm Island and Morgan’s Island in Ely’s Harbour were donated to the Trust in 1983 by the heirs of Mr. Fitch Ingersoll. The two undeveloped islands help preserve the special scenic value of Ely’s Harbour and are reserves for birds and other wildlife.