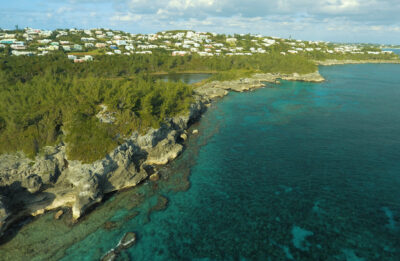 One of Bermuda’s most spectacular open spaces, this 64-acre nature reserve is Bermuda’s largest bird sanctuary, providing a diversity of habitats and an amazing variety of birds, especially during the migration seasons.

For non-birders, Spittal Pond is a beautiful place for a walk in nature around a loop trail that takes in a number of interesting features such as Portuguese Rock (the oldest evidence of humans on the island), Jeffrey’s Cave, where an escaped enslaved man was said to have hidden, and a fascinating geological formation called ‘the checkerboard’.  Interpretive signage throughout the reserves allows for a self-guided tour of these features, as well as explaining the habitats, flora and fauna that may be seen. 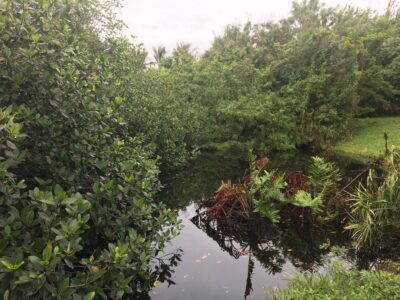 This lush 25-acre nature reserve offers a glimpse back in time to pre-settlement Bermuda.  The peat marsh has remained much the same since before the arrival of the first settlers, covered with a dense cedar and palmetto forest. It can be explored via a wheelchair-accessible wooden boardwalk that winds past the pond, mangroves and sawgrass habitat and into the forest itself.

The pond and marsh are home to an array of wildlife, including many species of resident and migratory birds. Interpretive signs present the story of this peat marsh, from its formation to how it is being preserved today.

The Bermuda National Trust owns approximately 17 acres of the reserve including the publicly accessible areas, car park and farmland. The Bermuda Audubon Society owns 8 acres in the heart of the marsh. 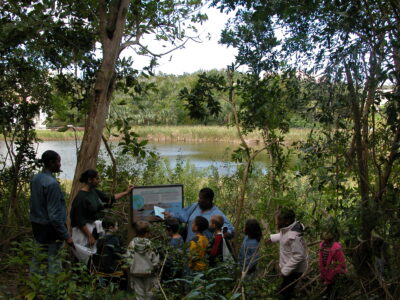 This 9-acre nature reserve includes the second largest freshwater pond in Bermuda, which is an important sanctuary for resident and migratory waterfowl. The  hillside south of the pond is part of an extensive woodland belt that borders the entire length of the Warwick Railway Trail. This woodland supports some of the largest Allspice trees in Bermuda and still contains a number of surviving endemic Bermuda Cedars. A nature trail with interpretive signage winds from the parking area near the pond through the woodland on either side of the Railway Trail.

The Higgs Nature Reserve is the southern portion of the Trust’s Tivoli property, bequeathed to the Trust in 1984 by Gloria Higgs.  This small area of wetland is all that remains of the Warwick West marsh, which once covered the whole of this valley. Most of the marsh was filled in with dumped trash in the 1960s and 1970s, but Miss Higgs refused to allow the Tivoli marshland to be filled. As development grew up around it, this small reserve was saved by a generous gift from the family of the late Sir John (Jack) Sharpe, a former Premier of Bermuda. The pond is now known as Jack’s Pond.

Devonshire Marsh is the largest contiguous open space in Bermuda, giving the area significant aesthetic and ecological value. The marsh is comprised of a west basin, between Jubilee Road and Parson’s Lane, and an east basin, between Middle Road and Vesey Street. Containing Bermuda’s largest peat marsh habitat and fresh water lens, the marsh was never used for dumping rubbish, unlike most wetlands in Bermuda.  It was, however, extensively filled around the edges with quarry waste to create farmland for growing celery, which, unusually, enhanced the value of the habitat. This filled area later became wet pasture. The habitat of the original marsh largely consists of sawgrass and bracken-fern savannah.

In the mid 20th century, to control mosquitos the Department of Health dug ditches around the marsh and created open water areas in which mosquito larvae-eating Gambusia fish could flourish. This also added to the habitat value, although today the ditches have become overgrown with invasive cattail.

Unlike some of Bermuda’s peat marshes, because of its brush fire prone habitat, Devonshire Marsh has been extensively burned, first in the “great fire” of 1914, and most recently in 2018.

A total of 35 acres of the marsh are under the protected ownership of the Trust, some of it owned jointly with the Bermuda Audubon Society.

Location: South Road, Devonshire NOT OPEN TO THE PUBLIC

This 3.2 acre reserve is known for its distinctive avenue of ancient Bermuda Palmetto along the South Road – possibly relics of the original pre-colonial forest. It lies in the southern section of Devonshire’s two major valley configurations, forming part of a long chain of marshlands extending along the South Shore on the lee side of what were once sand dunes. The marsh is a sanctuary for migrating birdlife. It is an important nesting site for Moorhen or Common Gallinule.

Formerly known as Smith’s Marsh, it was once filled with sedges, rushes, Palmetto, Bermuda Cedar and Wax Myrtle. People were starting to use this marsh as yet another dump site, leading philanthropic local businessman Edmund Gibbons to acquire it “in order to protect this beautiful section of marsh along the South Shore Road from being filled in as a garbage dump.”

The land was donated to the Trust in 1976 in memory of Sir Edmund by his sons, former premier Sir David Gibbons and former mayor of Hamilton Graham Gibbons. The Trust dug out the area that had been filled with trash, making a pond, and the Bermuda Audubon Society funded the laying of power lines underground to save birds from flying into them.

In 1975 the heirs of Mr. and Mrs. Henry Thompson North gave a portion of Mangrove Lake and an acre of land to the National Trust in memory of their parents. Over the next few years, the Trust ran a ‘Save Open Spaces’ fund-raising campaign and purchased a neighbouring lot, making the reserve 4.5 acres. The reserve protects an extensive stand of shoreline mangroves as well as the wooded hillside to the west.

HT North is one of the most important reserves in the Trust’s care, with two critically important ecosystems – a saltwater pond and pond mangroves – as well as the upland woodland. Bermuda’s saltwater ponds boast a remarkable diversity of species, second only to coral reefs. Mangrove Lake is the largest, and its size contributes both to its stability and to the variety of life it supports. It is one of the only two sites where the native Diamond Terrapin breeds, and is home to two breeding herons – the Yellow-crowned Night Heron and the Green Heron, which feeds on the endemic Bermuda Killifish. The Red Mangroves edging the western side of Mangrove Lake contribute greatly to the concentration of biodiversity and provide shelter for many unique marine species such as algae, sponges and oysters on their submerged prop roots. Mangrove Lake and Trott’s Pond have been proposed for designation as Ramsar sites because they “represent Bermuda’s largest enclosed brackish/salt water ponds.”

Location: South Road, Smith’s Parish NOT OPEN TO THE PUBLIC

This 1.7 acre reserve is located near the HT North Nature Reserve. About a quarter-acre is arable, and is leased to a farmer, while the remainder of the property comprises peat marsh with no open water.

Gerald Dupont Hollis, a farmer, owned this land for many years. Subject to a preservation agreement, it passed through the family until it was sold to the Trust at a very generous rate in 2000.